We update our blog regularly with articles related to precision etching

A Shining History of Stainless Steel 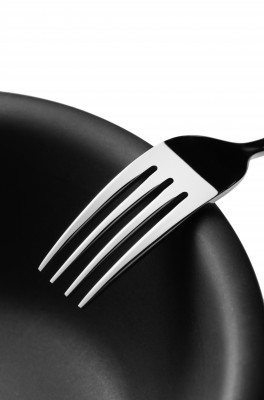 One of the first uses of stainless steel was in cutlery, where it is still used today.

Iron gets well-deserved credit as being a building block of civilization because of its revolutionary impact on warfare and farming, but perhaps stainless steel should be considered equally influential.

While the real impact of stainless steel wasn't felt until the early 20th Century, it has been called "the miracle metal" and "the crowning achievement of metallurgy."

What Is Stainless Steel?​

To understand the history of stainless steel, you must first know what it actually is. Stainless steel is an iron alloy that contains a minimum of 10.5% chromium, according to the British Stainless Steel Association (BSSA).

The alloy may also contain other metal and non-metal elements to enhance its properties, such as nickel, molybdenum, titanium, copper, carbon and nitrogen. To be considered stainless steel, the alloy must be corrosion-resistant when used for a certain application or in a certain environment, the BSSA explains.

Records exist of scientists and inventors from various countries working with stainless steel and noting its resistance to corrosion as far back as the early 1800s, although the term "stainless steel" had yet to be coined. However, stainless steel is generally known to have been "invented" by Harry Brearly, an English metallurgist who was tasked with finding a way to extend the life of gun barrels through erosion-resistant steel.

Thus, stainless steel was first made in 1913 with 12.8% chromium and 0.24% carbon. Brearly was convinced that cutlery was the perfect application for the new steel and used it to make strong, stain-resistant knives. This was where the generic term "stainless" arose, although the handy new alloy was almost named "rustless steel." (Doesn't have the same ring to it, though, does it?)

Others Stake Their Claim​

While many associate Brearly with the invention of stainless steel, the Germans claim to have invented stainless steel in 1908 in the form of a chrome-nickel steel used for the hull of the storied Germania yacht, the Half Moon. However, people debate whether the steel used in the hull had the required minimum 10.5% chromium, BSSA noted.

The U.S. also stakes a claim to being early users of the alloy, as inventor Elwood Haynes endeavored to create a corrosion-resistant metal to replace his rusty razor and improve his automobiles at around the same time as the English and Germans worked with the material. The Polish and the Swedes also created and used the alloy early and lay claim to being the inventor of stainless steel as well, according to the BSSA.

Some of the coolest early uses of stainless steel were during World War I in aircraft engines. In 1920-1929, stainless steel began to be used in automobiles and Swiss Army Knives, the BSSA noted. Later, stainless steel would define the age of progress as it was increasingly used in architecture (think of the Chrysler Building) and in passenger trains.

From its earliest uses, stainless steel has grown to be used in countless items that we take for granted every day, including dishwasher interiors, car exhaust systems, bridge structures, indoor/outdoor handrails and much more. It is also being utilized in innovative new technologies and processes, such as seawater desalination, clean water generation in arid areas and mass production of much-needed pharmaceuticals. Best yet? Not only does it last for decades, but it can be recycled after use with no lack of quality and used again and again for different applications, according to the International Stainless Steel Forum.

Northwest Etch is a metal etching company in Tacoma, WA, that provides photochemical machining services. We work with a wide variety of metals, and stainless steel etching is one of the many metal services we offer. Northwest Etch creates precision metal parts for numerous industries, including the medical, electronics and aerospace industries.

By accepting you will be accessing a service provided by a third-party external to https://www.nwetch.com/

What is Photo Etching

Photo etching vs. other metal fabrication

See how photo etching measures up with stamping, laser and waterjet cutting

Our technical guidelines on designing for the photo etching process