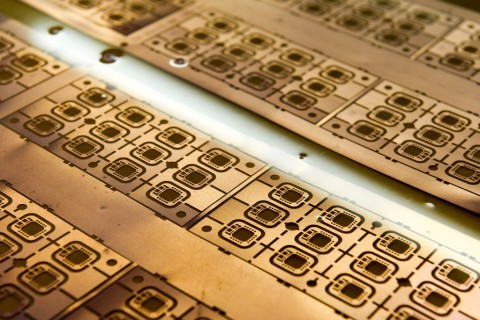 Some jobs start with a problem.

In 2007, an end customer began to complain about light reflection from a metal part on their received product. Four chemically etched parts were included on the product, but the two installed on the sides were especially problematic. Because the base metal for the parts was formed by electroplating, one side was smoother than the other. The left and right sides of the product received the same part, so one side would be smooth side-out and the other would be smooth side-in. The smooth-side-out part demonstrated considerably more glare, and the assembling company made corrections to the drawings so a second part was created and both parts would have the smooth side facing inward.

However, this still did not solve the reflection issue with the part. The post-etch cleaning process that prepared the parts for electroplating appeared to have the side effect of polishing metal. Because of the thinness of the plating layer, the shine from cleaning translated directly to the finished product. This "cleaning shine" caused the majority of the reflection problems.

A team of engineers from NW Etch and the production company assembled to rectify the problem. Al Lindley, the NW Etch engineer assigned to the team, began to experiment with different chemical cleaning solutions in an attempt to roughen the material prior to plating.

Al made several test pieces and replaced the current cleaning solution with several, shorter duration cleaning solutions. Because of the extreme thinness of the parts, chemical exposure time had to be closely monitored to prevent breakdown of the metal. Eventually, after several rounds of trial and error, he discovered a solution.

Test parts etched with the new post-process were sent to inspection, and passed. Additional application-specific testing was performed, and five completed parts were sent for assembly. One of the parts was assembled into the final product and passed acceptance testing.

Through willingness to experiment and improve, NW Etch solved the reflection issue and continues to produce parts for the assembly company to this day. Both the purchaser and the final buyer were beyond satisfied with the solution.

Since 1978, NW Etch has provided precision photo chemical milling services in Tacoma, WA., working in a wide variety of metals. Creating custom metal parts for a wide variety of industries allows us to proudly state:

"We machine components for the coolest projects, on and off the planet."

Preview our Photochemical Milling Method in just three minutes here @ https://www.nwetch.com Then let us assist with your next project. Contact us via This email address is being protected from spambots. You need JavaScript enabled to view it. or (800)-343-2401 today.

No comments made yet. Be the first to submit a comment

What is Photo Etching

Photo etching vs. other metal fabrication

See how photo etching measures up with stamping, laser and waterjet cutting

Our technical guidelines on designing for the photo etching process